Most of our followers will know that over the last few years, Survival Wisdom has been working with partners to support Rangers from a Belize based Conservation organisation, Friends For Conservation and Development (FCD). https://www.fcdbelize.org/about-us/

The Chiquibul is located in the South-Western region of Belize and has over 290,000 acres of tropical forest.  The area includes the largest cave system in Central America, the Caracol Mayan Site, the Chiquibul River which provides water to 40% of the Belize population and so much more. The FCD Park Rangers do the day to day monitoring and research within this vast forest area. Park Rangers mainly come from the local community but all share their passion for conservation of this historic and cultural landscape. A Landscape that without their work be decimated and plundered for the rich resources.

So over the last few years, the team have been deploying to get updates from the NGO and also observe and support some of the training, advocating the story of the Rangers from FCD and the tough work they are doing.

Last year we had the good fortune of being introduced, to an internationally recognised conservationist and TV Naturalist Giles Clarke.

Giles grew up in Middlesex UK, and became hooked on big cats when he was 16 after volunteering at a wildlife park. He later moved to Australia where he was the head of Big Cats at Australia Zoo, Queensland. Whilst their, Giles worked with the legendary Australian conservationist and TV presenter Steve Irwin.

Since returning to the UK, he has become the Director of Big Cats and Conservation at The Big Cat Sanctuary, Kent.

Giles has been at the forefront in promoting wildlife conservation and has been promoting conservation through his work with the BBC on the series " Big Cats about the house" where he rescued and hand reared a small fragile Jaguar cub called "Maya". He has been recently been working and filming with the BBC in Cambodia, documenting the illegal trade in Bears

As with all these things "one conversation, led to another", and I was invited to the Big Cat Sanctuary to discuss ideas and some concept work we had, and also meet "Maya" the Jaguar! She's Grown a bit since I first saw her on the BBC's Breakfast show! https://thebigcatsanctuary.org/

Following this meeting, Giles introduced me to a friend and colleague of his, who had been doing spectacular work in Africa, protecting Rhinos and Elephants, by providing tracking dogs and training to Rangers for anti poaching operations.

Daryll was given the heads up about our need for support for the Rangers in Belize, and the work they are doing.

We then get a call to Wisdom HQ in Cornwall, that Daryll had a female tracking dog (Sara) that was now, not going to India, but was available, if our friends needed the support. Immediately I knew, this was and incredible opportunity for the Rangers. Having used tracking dogs in a former life, as a British Military "Jungle Warfare Instructor" (JWI)

I had worked with tracking dogs in the Rainforests of Brunei, and understood the capabilities this resource gives any team. On a training exercise as a JWI in the Brunei, we were 60 km from any settlements, and the patrol I was in was on a resting halt. We had a tracking dog attached to our patrol, with a handler from the British Army's, Royal Veterinary Corps. Whilst at rest the handler was woken by the dog. (they are trained to silently wake the handler) The dog using his hyper sensitive sense of smell and hearing, had sensed the presence of human activity, at this point we could see or hear nothing! All the teams "stood-too" and looked out into our arcs, it was 30 mins before we picked up on, an enemy patrol moving towards us! This highly tuned animal had safeguarded our patrol from a potentially hostile encounter. On operations in Iraq and Afghanistan these K9 additions to patrols, have saved countless lives, by their super senses in detecting IEDS and booby traps!

This is the essence of why we wanted the dog, the Rangers are lightly armed, (for self defence)

The addition of the dog, will give them this early warning and also enable them to track the illegal incursions and routes. Armed with this enhanced capability, and with the support from other law enforcement organisations and partners, they should be able to detect and reduce illegal activities within the national park.

So in January 20, Daryll and John from the Animal Saving Animals Charity deployed Sara from the USA to Belize. The whole trip being funded by a kind donation from a USA based patron.

Sara and the team arrived in Belize for a training program with the Rangers. Sara was already trained; therefore, training of the new handlers was the main task. Sara's first handlers are to learn over the next few months all the skills necessary to become really effective handler's.

Daryll and the Rangers are seen in the pictures working with Sara, she is a young 18 month old Belgian Malinois, which are an extremely intelligent and hard working breed, and are perfect for this nature of work.

The Rangers have learnt about scent and sign and what Sara needs to track effectively and well.

They have learnt how to care for her and support her daily needs.

The team have built her a "Bug-proof" and "Snake Proof" home, and the money to build this was kindly donated by our friends from the Big Cat Sanctuary https://thebigcatsanctuary.org/

Thank you for your kind donation!

Darryll and John have now left Sara in her new home. The Chief Ranger quoted that the team of Rangers are "so grateful to have received the donation and love working with this new asset to the Ranger team"!

Sara will be funded, by the charity for the first year, which covers all her food, vet bills and any ancillaries that she will need.

Daryll will return to Belize in a few months to finish off the Ranger training and make sure that Sara is settling into her new role. 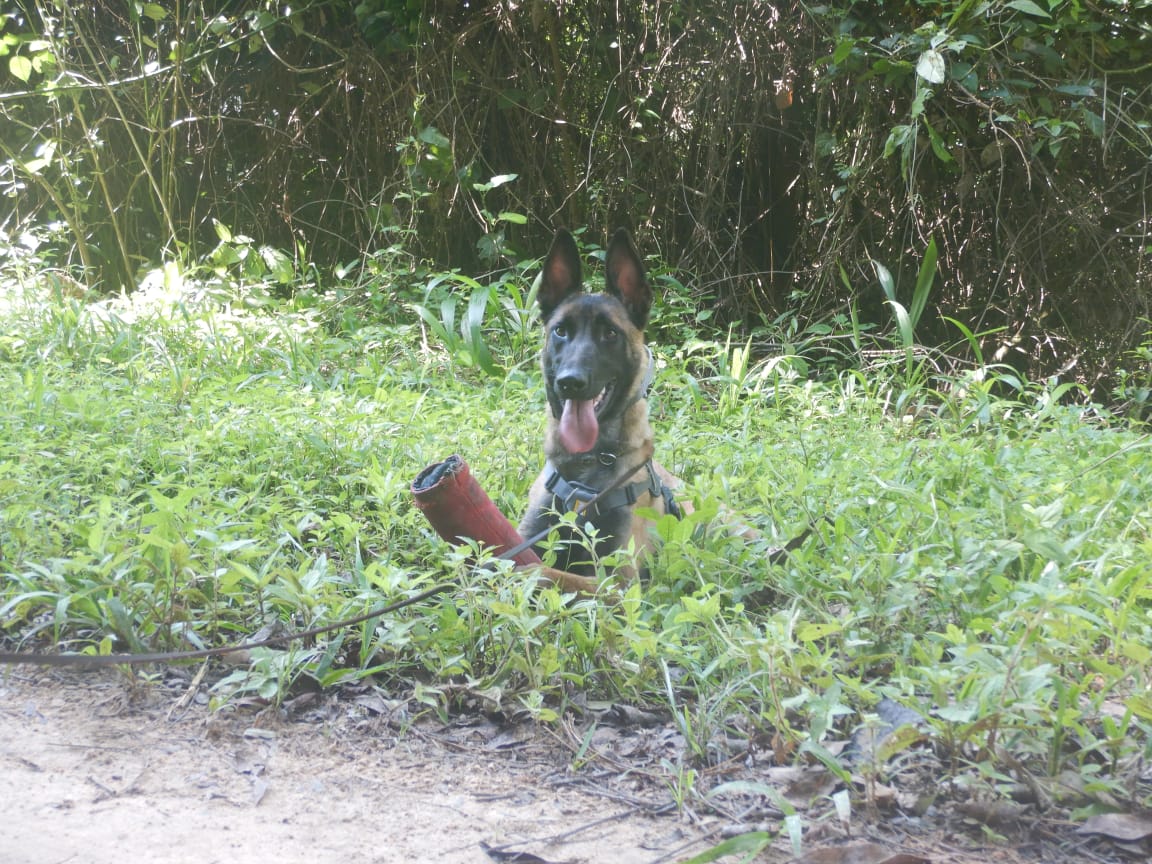 Our work in the region is ongoing and my team are committed to making a difference to conservation of Rainforest and habitat in Belize and around the globe.

There are so many people I would like to thank for their help and support, Giles Clarke, The Big Cat Sanctuary, Peter Sampson, Steve Sampson, Tracy Aslam for the introduction!

My biggest thanks must go to Daryll Pleasants from Animals saving Animals, https://www.animalssavinganimals.org/. you are an un-sung hero. I would ask any followers to like and follow his work, as his organisation are having significant effects on the illegal poaching of wildlife around the globe! If you know of anyone with a bit of spare cash in their back pocket Sara and the other dogs are a worthy cause!

Finally I want to wish the Rangers and Sara the best of luck, we will be following your exploits over the next year and know that the team at FCD will go from strength to strength with this new asset!

For Further information on Holistic Forest Defence Contact the team at: survivalwisdom@gmail.com